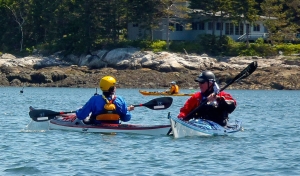 Kayaking can be a wonderfully enjoyable activity and for the most part, it is. But like many things in life, there are risks associated with it that cannot be eliminated other than by not participating. However, they can be minimized through preparation, which includes equipment, skills and most importantly good judgment.  The principal difference between the weekend pond paddler and the solo expedition adventurist is how far he or she has progressed on the learning path.

So, what are the risks?

The simple fact is that you could die. While statistically that’s much more likely to happen on the drive to the put-in, it’s still a serious concern. According to US Coast Guard and ACA statistics, there are approximately 12 kayaker deaths in the US per year on average, from various causes. That includes ALL kayakers, recreational, sea kayakers, fishermen, surfers and so on. Considering the number of people splashing around in kayaks, that’s actually a pretty good statistic, but of course, everyone would like to see that number drop to zero.

The following is a list of some of the more common risks associated with kayaking. The intent is not to scare you off the water, but to make you aware of dangers that perhaps you hadn’t thought of so you can take the necessary steps to protect yourself.

This is probably everyone’s #1 fear, although it’s a relatively rare phenomenon. Drowning deaths are generally caused by some other factor, some of which we’ll discuss below. However, the #1 cause of drowning deaths is failure to wear a Personal Floatation Device (PFD).    Wear a Coast Guard-approved PFD at all times on the water.

PFDs are required for all NSPN activities that are held on the water.

This is the greatest danger we face as paddlers in New England. Except on some small bodies of water in summer, the water temps rarely get high enough for hypothermia not to be a risk. The ocean water never gets warm enough, except in a few shallow bays during hot spells. Even 70 degree water can incapacitate and kill you if you’re in it long enough. Fortunately, hypothermia is not terribly difficult to protect against. The best course of action is: Dress for the water, not the air.

Unless you’ve actually experienced it, it’s difficult to understand how rapidly debilitating cold water is. In 40 degree water – which is common in the spring – an unprotected paddler can lose the use of his or her hands in as little as a couple of minutes! Once that happens, you are no longer able to help yourself and must rely completely on outside assistance. You could live for an hour or more, but you will be helpless and will quickly succumb to hypothermia, loss of consciousness and drowning.

On the other hand, if a paddler is wearing a dry suit and adequate insulating garments underneath (fleece, wool), neoprene boots, a neoprene hood, neoprene or dry gloves, it’s possible to be fully functional in 40 degree water for 30 minutes or more and survival time is measured in hours. Believe it or not, it’s possible to paddle comfortably dressed that way, too!

Never heard of it? Join the crowd! Believe it or not, this seemingly obscure problem is the probable cause in the most mysterious cases of drowning where the victim falls in, goes under and never comes up. The human body has a natural reflex that causes us to gasp uncontrollably when our head, neck and chest are suddenly immersed in cold water. Think about that for a minute. You hit the water and go under, your body reacts by making you gasp, you suck in a lungful of water and it’s all over. Gasp reflex is actually at its strongest at water temps of ~60 degrees F, just when most people are starting to think the water is safe.

While it’s possible to minimize the effect of gasp reflex, the more practical solution for most of us is the same as for hypothermia: dress for the water temperature.

Most people probably think of getting hit by power boats or jet skis, but this type of injury can also happen from hitting your head on rocks, slips and falls on shore, getting tumbled in surf, being hit by another kayak or anything else that causes a forcible impact with a hard object. Wear protective gear, such as a helmet, where conditions indicate.

Encounters with Dangerous or Aggressive Wildlife

While everyone’s first instinct is to think “SHARKS!”, shark attacks on kayakers are very rare, especially in the Northeast. Of greater concern are stinging animals such as jellyfish and aggressive sea birds during nesting season. Although seals are cute and cuddly looking, they are large, powerful animals that can be very dangerous if provoked or even if they become physically “playful”. It’s best to avoid close encounters with wildlife. Many species are protected by the Marine Mammal Protection Act and other laws which make it illegal to approach them or their habitat. On shore, poison ivy and thorny plants of various types are often present. Learn to recognize and avoid them.

Wet, seaweed-covered rocks are a hazard at many put-ins. Lugging a heavy kayak across them can be dangerous. Paved boat ramps can be very slick, too. Choose your put-in and take-out points carefully to reduce these risks. The first thing many people do when they get to their destination is unstrap their helmet. Keep your helmet on when moving kayaks at launch and landing.

Launching and landing through surf, or assisting others to do so, can be quite dangerous. Learn the proper techniques before attempting surf launches or landings.

These factors are often interrelated. It’s easy to forget that you may to be out on the water for several hours, exposed to the full effects of the sun. Use sunscreen on all exposed skin. There are few nicer places to be on a hot summer day than out on the water and exposure to the sun and exertion can cause you to perspire and dehydrate. Dehydration reduces your ability to paddle and can turn a beautiful trip into an arduous chore. It’s also a major contributor to heat exhaustion and heat stroke. Keep plenty of fluids within easy reach and make it a point to drink often. It’s better to have to stop for an occasional “nature break”, than to become dehydrated and risk more serious consequences.

When possible, two people should assist in carrying a boat.  For boats loaded for extended trips or camping, it is best to have 4 or more people to a boat.  Remember to lift with your knees, not your back.

This list is by no means comprehensive. Conditions and risks vary with the seasons and from one area to the next, so you should further educate yourself about the specifics of the area(s) you paddle in. It’s also a good idea to take a first aid course – Wilderness First Aid in particular – Make sure you have reliable means of contacting help, if necessary.

Float Plan – A float plan gives you a safety net. No one is going to come looking for you if no one knows you’re lost. A float plan first sets a time for a search to begin, it then makes the search for you more effective by giving the searchers a starting point and anticipated route. A copy of the float plan should be kept in the dash of the car, with each member of your paddling group, as well as back home with your emergency contact person.  For a sample float plan, click here.